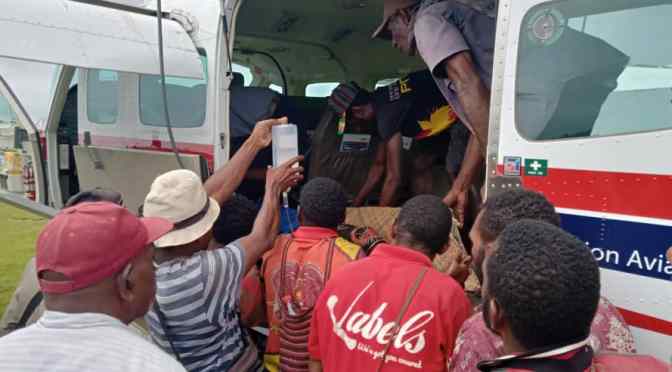 This week has been quite the week! It seems that every day there has not been one, but two or three medical evacuations!

On Friday, 17-September, Our MAF Operations Center in Mount Hagen, received the call of a young man who was gravely ill and who needed to be transported from the remote village of Suki in the Western Province of Papua New Guinea, to the Regional Hospital in Daru.

Plans were immediately initiated. PNG National Pilot, Joseph Tua, was contacted and of course, he was only too willing to come to the airport and prepare the aircraft for a launch to Suki.

Upon arrival he found a young man who several days prior, had been speared in the abdominal region during a fight. Time was of the essence! Infection had spread, the bowel had become blocked for the past few days, and this young man was in truly critical condition.

Joseph and the village helpers carefully loaded the patient into P2-MEW, one of our new C-208 Caravans, and Joseph was off to Daru, a life critically hanging in the balance.

At 15 minutes past 5 pm, Joseph and his patient landed in Daru. An ambulance was waiting and the patient was whisked away for life-saving surgery.

Had our MAF plane not been there on this day, this young man would have very likely perished. This is why we do what we do! Sharing God’s love each day through tangible expressions; providing help, hope, and healing in Christ’s name!

Thank you to each of our Ministry Partners! We are here on the front lines because you are there, sacrificially praying and paying the price!

8 thoughts on “Serving Together to Bring Help, Hope, and Healing to Those Many Have Forgotten..”